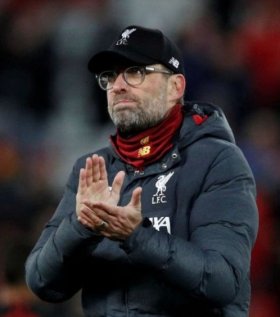 Liverpool's Mohamed Salah shuns Barcelona and Real Madrid: 'I want to stay as long as I can'
people, who show me love all the time." Chelsea make Haaland their primary summer transfer target - reports Salah has fired Jurgen Klopp's
18/01 21:14

Liverpool manager Jurgen Klopp has provided a fitness update on Joel Matip and Naby Keita ahead of the Premier League clash against Manchester United.

Reputed Italian journalist Fabrizio Romano has said that Liverpool are unlikely to spend significant sums of money on a new defender this month.

Liverpool manager Jurgen Klopp has insisted that the club are unlikely to pursue a new centre-back during the ongoing transfer window.

Liverpool have reportedly accepted that they won't be able to offload Xherdan Shaqiri during the current transfer window.

Liverpool could offer stiff competition to Manchester United in the pursuit of Jadon Sancho at the end of the season.

Liverpool have suffered a fresh injury blow with both Joel Matip and Naby Keita ruled out for the Premier League clash at Newcastle United.

Liverpool have reportedly made contact with the representative of Lille defender Sven Botman regarding a possible January move.

Ajax defender Perr Schuurs has dismissed the prospect of leaving the Dutch champions next month amid the reported interest from Liverpool.

Liverpool have no plans of pursuing the services of Jack Grealish despite his consistent displays for Aston Villa this season.

Despite having one the most dangerous attacks in the world of football, Liverpool perhaps lack depth towards the final third of the pitch. Behind Mohamed Salah, Roberto Firmino, and Sadio Mane, the Reds have reaped the rewards of strategic recruitment following the early form of Portugal’s Diogo Jota.

Liverpool manager Jurgen Klopp has confirmed that Diogo Jota could be out of action for up to two months after sustaining a knee injury.

Liverpool manager Jurgen Klopp has said that goalkeeper Alisson Becker could make his comeback for the forthcoming Premier League clash against Fulham.

Liverpool to swoop for another Wolves star?

Liverpool are reportedly looking into a move for Wolverhampton Wanderers midfielder Ruben Neves as they aim to reinforce their midfield.

Liverpool manager Jurgen Klopp has confirmed that Trent Alexander-Arnold and Naby Keita have returned to training ahead of the Premier League clash against Wolverhampton Wanderers.

Brighton & Hove Albion midfielder Yves Bissouma is reportedly on the radar of Arsenal and Liverpool ahead of the winter transfer window.

Liverpool yet to make offer for Dutch centre-back

Liverpool have yet to make an offer for Ajax defender Perr Schuurs contrary to the speculation last week.