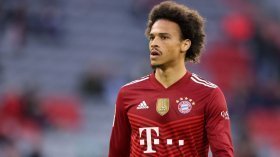 Bayern Munich star Leroy Sane has no plans of joining Manchester United during the ongoing transfer window, according to Sport1.