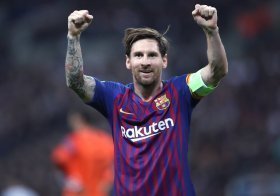 Manchester United have been handed a blow with Ronald Araujo set to sign a new long-term contract at Barcelona.

Cristiano Ronaldo would be open to joining Paris Saint-Germain this summer if Manchester United fail to qualify for the Champions League.

Chelsea midfielder Jorginho has said that Manchester City's Kevin de Bruyne would be his leading candidate for the Ballon d'Or.