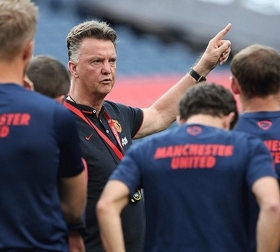 Manchester United are putting Louis van Gaal transfer theory to the test
internationals about the risks of moving to Old Trafford. United's transfer strategy under their second Dutch manager this summer isn't
29/06 11:50

Dutch journalist Marcel van der Kraan has confirmed that Ajax defender Jurrien Timber has decided to snub interest from Manchester United amid fears of missing out on the World Cup.

Manchester United midfielder Donny van de Beek has hired a new agent to push for a January move away from the club.

Arsenal could reportedly make a formal bid to sign Chris Smalling from Manchester United during this summer's transfer window.

Arsenal have reportedly joined the likes of Tottenham and AS Roma in the race to sign Chris Smalling from Manchester United this summer.

The long-term future of Ole Gunnar Solskjaer is a constant talking point within the media. However, is it time that they finally give the Manchester United manager a break?