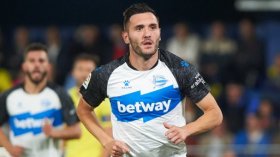 'An enjoyable story' - Why Joselu is thriving at Alaves after difficult Newcastle United spell
at the Mendizorrotza Stadium and struck up an unlikely partnership with West Ham United and Arsenal flop Lucas Perez. "Joselu has been a
25/11 06:00

Barcelona are reportedly interested in Leganes striker Martin Braithwaite as they are allowed to make an emergency signing following the injury to Ousmane Dembele.

Barcelona star Luis Suarez could return to action sooner than expected as he is making good progress in his rehab, according to Daily Mail.

West Ham look set to let Spanish forward Lucas Perez leave the club, just six months into his troubled spell with the East London side. The forward, who has a four year contract with the London Stadium outfit, is believed to have instructed his agent to find him a club to join back in La Liga.

Lucas Perez on cusp of transfer to West Ham from Arsenal

Spanish forward Lucas Perez is on the verge of completing a transfer from Arsenal to West Ham United. It is understood that Perez will sign a three-year contract at the London Stadium and will make a move in a deal worth £8.25 million to the Gunners.

Arsenal are reportedly seeking to beat Manchester United in the race to sign Jerome Boateng from Bayern Munich this month.

Arsenal boss Unai Emery is prepared to sanction the departure of Danny Welbeck before the transfer window closes this month.

Arsenal forward on the cusp of summer exit?

Arsenal winger Lucas Perez is reportedly heading for a summer exit with the Gunners said to have finalised a transfer package with Sporting Lisbon.

Arsenal forward Lucas Perez is reportedly close to making the switch to Fiorentina before this month's transfer deadline.

Arsenal are reportedly prepared to sanction the departure of Alex Iwobi, should any of his suitors match their &pound22m asking price.

Arsenal manager Unai Emery has dropped five players from the Gunners' 25-man squad which has travelled to Singapore for the International Champions Cup.

Arsenal are planning to sell some of their players to make room for new ones, according to Goal.

Arsenal attacker 'determined' to fight for his future

Arsenal forward Lucas Perez is determined to fight for his club future despite the reported from the likes of Lazio. The Spaniard has returned to the Gunners after a decent loan spell with Deportivo La Coruna and he is now keen to impress under new boss Unai Emery.

Serie A side Lazio have expressed an interest in signing Arsenal outcast Joel Campbell this summer. The 26-year-old has been with the Gunners for the past seven seasons, although he has managed just 40 appearances across all competitions.

Spanish forward will stay put with Arsenal next season - Agent

The representative of Lucas Perez has confirmed that his client is keen on succeeding with Arsenal and will rejoin his teammates for pre-season training.

Arsenal have confirmed the arrival of Bernd Leno from Bayer Leverkusen for a reported fee of around £22m.

Arsenal have reportedly told Lucas Perez to return to pre-season training at the club with manager Unai Emery prepared to revive his Gunners career.

The representative of Lucas Perez has hinted that his client could be interested in a move to Lazio. The 29-year-old is currently contracted to Arsenal until the summer of 2020.