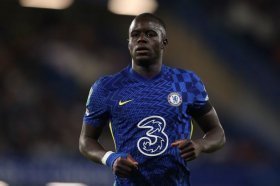 Chelsea defender Malang Sarr scores utterly bizarre own goal during Monaco’s heavy Europa League defeat to Trabzonspor
... not in the way that he had wished. The central defender moved to Stamford Bridge back in 2020 but has spent much of his time at the club ...
13/10 21:54

Chelsea defender on his way to Monaco

Chelsea defender Malang Sarr is reportedly on the verge of joining Monaco on loan with an obligation to buy.

Chelsea have blocked the departure of Malang Sarr to Fulham, according to Standard Sport.

Chelsea face Lille on the road in tonight's Champions League clash. The Blues have a 2-0 lead from the round of 16 first leg, and have an excellent chance of progressing to the last eight.

Chelsea travel to Kenilworth Road for tonight's FA Cup fifth round tie against Luton Town. The Blues will be aiming to bounce back from the League Cup final defeat to Liverpool.

Chelsea face Liverpool in the Carabao Cup final on Sunday. The Blues are aiming to win the competition for the sixth time in their history.

Chelsea host Lille in the first leg of the Champions League round of 16 tie tonight. The Blues will start as favourites, having won their last five games across all competitions.