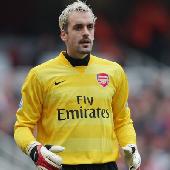 Manuel Almunia bemoans current state of Arsenal: ‘It’s a shame’
situation at the Emirates. Before the coronavirus hiatus for football across the globe, Arsenal sat ninth in the Premier...
20/04 12:39

Former Manchester United trainee Gary Woods has signed a one year contract with Watford after having trained with them since August.

Arsene Wenger is planning a busy summer of transfer activity, as he plans to sell many of the fringe players at the Emirates. Names that are included in this batch are believed to include Marouane Chamakh, Andrei Arshavin, Denilson, Nicklas Bendtner, Carlos Vela, Manuel Almunia and Sebastien Squillaci.

This weekend marks the 125th anniversary of Arsenal Football Club, as the Gunners host Everton in today's Premier League battle at the Emirates. The Gunners are in inspired form, winning 6 of their last 7 games; whilst Everton remain hopeful of continuing their push from the mid-table.

Arsenal manager Arsene Wenger is said to be looking at Sevilla goalkeeper Javi Varas, who was recently in the spotlight for saving a Lionel Messi penalty.

West Ham United manager Sam Allardyce has admitted that the club could extend Manuel Almunia's loan depending on the fitness of first choice keeper Robert Green.

Arsenal's Manuel Almunia has been signed by West Ham United for an initial one month emergency loan to provide cover for the injured Robert Green.

There are reports that Arsenal have accepted a £4m offer from Galatasaray for Ivory Coast international Emmanuel Eboue. Arsene Wenger has decided to cash in on the player that he signed to a new contract only last November.

Manuel Almunia has been linked with a shock move to Premiership rivals Newcastle from Arsenal. The Spaniard has fallen down to third choice goalkeeper at the Emirates.

Newcastle boss Alan Pardew has revealed that there is still plenty of money left to spend on new players. Newcastle have already brought in Yohan Cabaye, Sylvain Marveux and Demba Ba this summer.

Arsenal goalkeeper Manuel Almunia is being lined up as a successor for David De Gea at Atletico Madrid, according to reports.

Aston Villa will make a 3m GBP offer for Manuel Almunia, the Spaniard who has fallen out of favour at Arsenal behind Lukasz Fabianski.

Manuel Almunia has been told he is surplus to requirements at the Emirates stadium, and is set to quit the club in the January transfer window when it reopens.

Arsenal goalkeeper Manuel Almunia has emerged as a shock target for Spain La Liga giants Valencia, according to reports. It is understood that Valencia will be ready to offer 2 million GBP for the keeper.

There have been reports this morning that Arsenal boss Arsene Wenger has decided enough is enough with the goalkeeping crisis at the Emirates, and the Frenchman has reportedly lodged a formal offer for Sunderland goalkeeper Craig Gordon.

Łukasz Fabiański has been linked with a shock move away to Real Zaragoza. It is understood that the young Pole, who only just recently signed a new contract at Arsenal, is ready to explore the possibility of a move on loan.

Arsenal's Premiership challenge could well be back on. Robin van Persie was the hero at Stamford Bridge on Sunday afternoon as he grabbed two stunning goals to see the Gunners down Chelsea by 2-1. Johan Djourou's own goal gave Chelsea the lead early on. The stunning result gives Chelsea their second home Premiership defeat of the year, and does put question marks over the progress made under Luiz Felipe Scolari. Arsenal, however, will hope that this breathes some much needed life back into their Premiership title hopes as they now sit seven points behind those at the top of the table.

Arsenal have been linked with a shock move for Italian goalkeeper Carlo Cudicini, who is currently the number 2 at Chelsea, as Wenger becomes rapidly concerned with the form of Manuel Almunia.

Tottenham stunned Arsenal with one of the all time Premiership comebacks, as Spurs grabbed two incredibly late goals to draw 4-4 at the Emirates Stadium on a miserable Wednesday night for Arsenal.