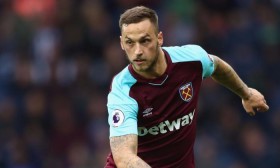 West Ham set to miss out on Marko Arnautovic as striker reveals he is heading back to Shanghai | CaughtOffside
, but is now returning to China and a sensational switch back to the Premier League looks to be off the cards. Arnautovic has since taken to
13/01 08:36

West Ham have made a renewed offer for West Bromwich Albion attacker Salomon Rondon, believed to be in the region of around £15 million. The attacker, who spent last season on loan at Newcastle United, was unable to agree personal terms with the Toon Army.

West Ham United to swoop for Serie A striker?

West Ham United manager Manuel Pellegrini is reportedly eyeing a reunion with Roma striker Edin Dzeko, who is keen on a fresh challenge elsewhere in the summer.

West Ham United have reportedly emerged as fresh candidates to prise away Olivier Giroud from Chelsea before the closure of the winter transfer window.

West Ham manager Manuel Pellegrini has deployed a scout to monitor Javier Jimenez Garcia, a 21-year-old centre-back currently playing for Valencia. Garcia, who has yet to force his way into Valencia's first-team, has been a regular for the 'B' side.

Austria international Marko Arnautovic has returned to first-team training with West Ham United despite the uncertainty surrounding his future with the club.

Tottenham Hotspur are reportedly considering a surprise swoop for West Ham United forward Andy Carroll as they seek to cover up the void left by Harry Kane.

Tottenham Hotspur are reportedly keen on acquiring the signature of Roma forward Edin Dzeko before the close of the winter transfer window.

Both Newcastle United and West Ham are in the race to sign talented striker Gregoire Defrel on a permanent deal from Roma. Defrel currently plays on loan with Sampdoria but a string of impressive displays have captured the attention of several top Premier League sides.

West Ham United have indicated that Marko Arnautovic is not for sale amid the recent transfer interest from the Chinese Super League.

West Ham United have reportedly decided against the sale of Javier Hernandez this month amid the speculated interest from Spanish club Valencia.

West Ham United are reportedly among the clubs monitoring the progress of Munir El Haddadi, who has struggled to make himself a regular with Barcelona.

West Ham United are understood to have no plans of offloading Marko Arnautovic in the New Year despite the strong interest from Manchester United.

Austria international Marko Arnautovic has dismissed the ongoing speculation regarding his West Ham United future amid the interest from Manchester United.