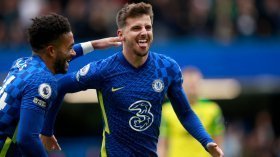 Liverpool journalist speaks about Mount links to Anfield
... Liverpool have recently been tipped with making a move for Chelsea’s Mason Mount in the summer and journalist Neil Jones has weighed in on ...
26/01 20:18

Chelsea have been in contact with Bundesliga club Borussia Mönchengladbach regarding a potential move for France international forward Marcus Thuram, as the Blues appear to be ready to give up on a move for Mykhaylo Mudryk. Marcus Thuram arrived in Germany in 2019 for a transfer fee of 12 million euros, and any Chelsea move for the player is likely to cost four times that, as 50 million euros appears to be the player's price tag.

Serie A giants Juventus are interested in signing Chelsea midfielder Mason Mount amid the uncertainty over his contract.

England fans looking for Wales victory to turn around fortunes

England's dismal performance against the USA last week in the World Cup has seen a dismissal of Southgate's chances of lifting the trophy, and the country's fans will be hoping a win over Wales will not only guarantee qualification as the group leaders, but also an opportunity to get supporters back on side. Southgate's team defeated Iran 6-2 prior to the 0-0 result against the US.

Chelsea midfielder Mason Mount has turned a contract offer worth £200,000-a-week, according to The Daily Mail.

Chelsea are prepared to re-open contract negotiations with midfielder Mason Mount in the New Year.

Liverpool are reportedly keeping tabs on Chelsea midfielder Mason Mount ahead of a possible approach next summer.