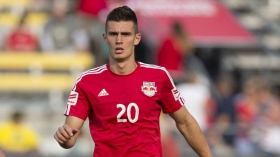 Tom Lawrence and Matt Miazga sent off for furious bust-up AFTER full-time whistle in Derby’s 2-1 win over Reading
EVERY PENNY Liverpool must pay rivals bonuses after title win with Arsenal to benefit IT'S LALL OVER Lallana & Clyne to ...
27/06 14:41

Chelsea have reportedly planned to loan out Fikayo Tomori for the 2019/2020 season despite him being a regular during the pre-season matches.

Chelsea have reportedly allowed Matt Miazga to join Nantes on a season-long loan. The 23-year-old has spent the past two seasons on loan with Vitesse Arnhem and he has now taken up a temporary challenge in the French Ligue 1.

Premier League holders Chelsea will assess the position of defender Matt Miazga once he returns from his loan stint at Dutch club Vitesse Arnhem.

Chelsea have announced the signing of defender Matt Miazga from MLS side New York Red Bulls.