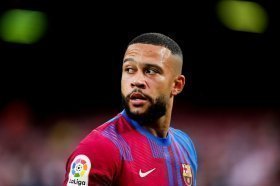 DE-PARTING Juventus closing in on Memphis Depay transfer with striker ‘set to have Barcelona contract terminated’
Aubameyang could also be on his way out just eight months after joining the club. The former Arsenal striker is being targeted by Chelsea.
13/08 19:04

Tottenham have made a last ditch offer to sign Memphis Depay from under the noses of Juventus, with Spurs' director of football Fabio Paratici contacting the Dutchman's agent with regards to a potential return to the Premier League. Depay is likely to leave Barcelona after just two years on a free transfer, and Juventus have already made a generous offer to the Netherlands international forward.

Dutch international Memphis Depay could be allowed to leave Barcelona on a free transfer this summer, as the Spanish giants struggle to sell the players required so that they can register new signings. Pierre-Emerick Aubameyang has also been linked with a departure, but Depay is understood to be the likely exit, with Juventus and Chelsea amongst the clubs interested in the player's services.

Manchester United have been handed the opportunity to sign Memphis Depay from Barcelona this summer.

Man Utd flop on his way to Tottenham Hotspur?

Arsenal are reportedly keen on landing the services of Barcelona attacker Memphis Depay this summer.

Arsenal have reportedly enquired over the possibility of landing Barcelona forward Memphis Depay this summer.

Arsenal have expressed an interest in signing Barcelona attacker Memphis Depay during the upcoming transfer window.

Barcelona have been credited with an interest in Arsenal defender Gabriel Magalhaes ahead of the summer transfer window.