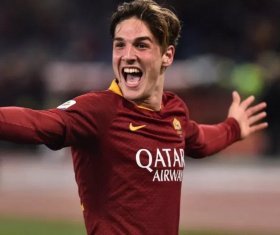 Roma have reportedly made contact with Chelsea regarding a possible move for Pedro during the current transfer window.

Sunday night’s Roma v Juventus clash at the Stadio Olimpico has claimed its second victim of the season, with Bianconeri defender Merih Demiral out for the rest of the season after suffering an ACL injury. Roma star Nicolo Zaniolo also suffered the same injury in the same match and now both players’ participation in Euro 2020 is in serious doubt.

AS Roma hold the key to Giroud's Chelsea-Inter switch

AS Roma could hold the key to Olivier Giroud’s proposed move from Chelsea to Inter Milan. After reports on Sunday claimed that the French striker had agreed personal terms with the Italian giants, Monday’s Gazzetta dello Sport writes that the Nerazzurri must first sell before Giroud’s transfer can be completed.

Manchester United are understood to have jumped ahead of Arsenal and Tottenham Hotspur in the race to sign Roma playmaker Nicolo Zaniolo.

Tottenham are ready to make Roma midfielder Nicolo Zaniolo their next transfer target. The White Hart Lane side have already been locked in talks with the Serie A side regarding a £40 million transfer move for the Italian international.

Tottenham join Arsenal in the race to sign Roma starlet

Tottenham Hotspur have reportedly joined arch-rivals Arsenal in the race to sign Nicolo Zaniolo from AS Roma at the end of the campaign.

Arsenal are reportedly on the cusp of signing Monchi as their first-ever technical director following his departure from AS Roma earlier in the week.

Chelsea are reportedly prepared to fight it out with Juventus for the services of Nicolo Zaniolo from AS Roma during this summer's transfer window.