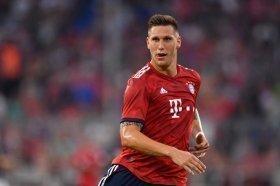 Chelsea behind the scenes: Niklas Sule, Romelu Lukaku, Olivier Giroud, team selection vs Fulham
could be given Premier League minutes. In each football.london Chelsea bulletin, we'll be bringing you the latest breaking news, transfer
29/04 07:00

Chelsea are planning to make an approach for Bayern Munich defender Niklas Sule ahead of the summer, The Athletic reports.

Chelsea could be prepared to part ways with Kurt Zouma when the transfer window reopens at the end of the season.

Chelsea have made an offer to sign Bayern Munich defender Niklas Sule, a report from German outlet Abendzeitung claims.

Chelsea have been handed a boost in signing Bayern Munich defender Niklas Sule this summer.

Bayern Munich have confirmed that they have reached an agreement with RB Leipzig to sign Dayot Upamecano this summer.

Bayern Munich defender Niklas Sule has revealed that he had an option to move to England and sign for either Tottenham or Manchester United prior to moving to the Bavarian side. Sule arrived in Munich from Bundesliga rivals Hoffenheim in a 25 million euro transfer deal in 2017.

Manchester United have reportedly enquired with Bayern Munich over the possibility of signing centre-back Niklas Sule during the summer.

Manchester United could reportedly make an approach to sign Mats Hummels from Bayern Munich when the transfer window reopens at the turn of the year.

Germany head coach Joachim Loew has confirmed that Arsenal defender Shkodran Mustafi will be on the sidelines after he sustained a thigh muscle injury during his side's final World Cup qualifier game.

Chelsea could turn their hunt for a new central defender to the German Bundesliga as times of uncertainty at Southampton could throw a move for Virgil van Dijk into doubt.

Hoffenheim defender Niklas Sule has confirmed that he turned down a move to Chelsea in order to link up with Bayern Munich at the end of the campaign.

German wonderland Niklas Sule is wanted in the January transfer window by both Arsenal and Liverpool. The Premier League giants have deployed scouts to watch the centre back in action.

Hoffenheim defender Niklas Sule is expected to join Bayern Munich at the end of the season. The German champions have finalized a five-year pre-contract with the centre-half.