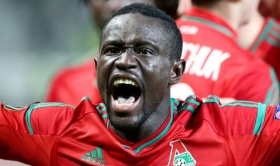 Huddersfield Town and Kayden Jackson: Will they renew interest? Is a summer move likely?
off the table after they recently brought in former Everton striker Oumar Niasse on a free transfer, with the experienced frontman adding to
30/03 10:58

Out of favour striker Oumar Niasse has joined Cardiff City on a loan deal until the end of the season, after seeing his first-team opportunities dwindle at Everton over the past 12 months. The burly forward has the option to make his loan transfer a permanent contract in June.

Arsenal are reportedly hopeful that Petr Cech will take the playing field when they face-off against Tottenham Hotspur in the local derby at the Wembley Stadium.

Everton head coach Ronald Koeman has revealed that the Toffees were close to pursuing the services of Arsenal striker Olivier Giroud during the summer transfer window.

Niasse, who less than a year ago was ousted from the team by Ronald Koeman, may have just saved the Dutchman's job after his brace gave Everton their first win in the Premier League after four games.

Outgoing Chelsea striker Diego Costa knocked back advances from Everton during the final days of the summer transfer window.

Everton have reportedly placed an £8m price tag on Oumar Niasse's head amid interest from Brighton and Hove Albion. The Senegal international is currently deemed surplus to requirements at Goodison Park.

Everton manager Ronald Koeman has not changed his mind on selling Oumar Niasse despite an impressive season on loan with Hull City.

Premier League minnows Burnley will seek to pursue the signature of Everton's Oumar Niasse, should they fail to keep hold of Andre Gray beyond the summer.

Everton have allowed Oumar Niasse to seal a temporary move to Hull City for the campaign. The Senegal international has failed to establish himself as a regular this season.

Everton are close to completing a winter move for Lokomotiv Moscow striker Oumar Niasse, according to reports.