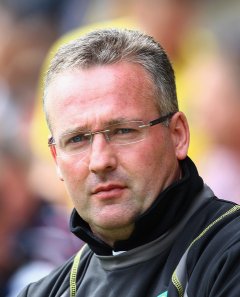 ‘Better and better’: Paul Lambert says Rangers have made a super signing
get used to that and knuckle down with it, he’ll be fine.” In other news, Report: Arsenal could now sign Tottenham Hotspur target for £34m
19/07 20:00

Former Barcelona attacker warned to stay away from club

Former Barcelona attacker Ibrahim Afellay has been warned to stay away from his current club Stoke City by manager Paul Lambert after his attitude and performances have been deemed to be harmful to The Potters' hopes of beating relegation from the Premier League.

Manchester United have discussed personal terms over a fresh contract with defender Marcos Rojo. The Argentine has managed just eight appearances since his recovery from a long-term knee injury this term.

Wolves yet to decide on Borthwick-Jackson

Wolverhampton Wanderers boss Paul Lambert has revealed that he is yet to reach a conclusion over the future of Cameron Borthwick-Jackson. The teenager is on a season-long loan from Manchester United.

Aston Villa have relieved Paul Lambert from his managerial duties after two-and-a-half-years in charge.

Aston Villa have reportedly make a formal approach for Liverpool striker Rickie Lambert, according to The Mail.

Sunderland, Burnley, Aston Villa and Everton have all been linked with a six month loan deal for Ravel Morrison. The attacking midfielder is no longer required at Upton Park and his contract will expire at the club this summer.

Aston Villa have reportedly joined the likes of West Bromwich Albion and Hull City in the pursuit for Senegalese international Demba Ba.

Manager Paul Lambert has received the full backing of Aston Villa. The club's chief exec Tom Fox indicated that the Scottish coach will be given more time to lead the side.

Everton are preparing a surprise loan move for Aston Villa midfielder Charles N'Zogbia, according to The People.

Arsenal have successfully completed the signing of Valencia midfielder Carles Gil on a four-and-a-half year deal.