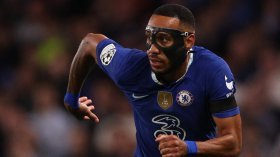 Barcelona are reportedly looking at the possibility of re-signing Chelsea striker Pierre-Emerick Aubameyang this month.

Chelsea eyeing up another striker this month?

Chelsea could make an approach for another striker in the transfer window amid their woeful Premier League form.

Chelsea could attempt to sign Brentford striker Ivan Toney at the end of the season, journalist Peter O'Rourke claims.

Chelsea have revived their interest in signing Manchester United forward Marcus Rashford, according to Simon Jones.

Armando Broja has said that he has a 'massive opportunity' at Chelsea after signing a new six-year contract this summer.