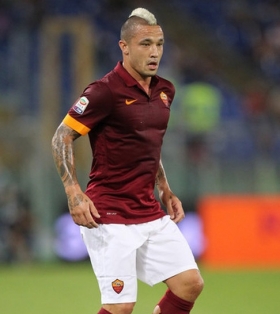 Five Premier League players who ended up regretting transfer deadline day moves
of the most regrettable deals... Danny Drinkwater Chelsea had spent most of the transfer window trying and failing to sign Radja Nainggolan
28/08 07:10

Inter Milan have reportedly proposed to secure the signature of Nemanja Matic from Manchester United in a player-plus-cash deal this summer.

Roma sporting director Monchi has reportedly been identified as a possible target for both Manchester United and Barcelona.

Germany are the defending world champions and head to Russia this summer among the favourites to repeat their success from four years ago.

Arsenal could reportedly make an approach for Roma midfielder Radja Nainggolan, should Luis Enrique be appointed as their next head coach.

Chelsea goalkeeper Thibaut Courtois feels Antonio Rudiger may have misheard his instructions in the lead-up to Roma's second goal last night. The Blues endured one of their worst displays in Champions League history after they succumbed to a 3-0 defeat to Roma at the Stadio Olimpico.

Manchester United had kept a close watch on both Saul Niguez and Radja Nainggolan during last week's Champions League clash between Atletico Madrid and AS Roma, which ended goalless.

Roma have announced that Belgian midfielder Radja Nainggolan has signed a new four-year deal at the club.

Premier League rivals Chelsea and Manchester United were both dealt blows yesterday after Roma's president confirmed that Radja Nainggolan will sign a contract extension at the club.

Radja Nainggolan's future is still in doubt as he has still not renewed with Roma, and a recent instagram comment has added to speculation that he could leave the Giallorossi.

Manchester United have reportedly made a huge offer toRadja Nainggolan in an attempt to pry him away from Roma.

Belgium international Radja Nainggolan has refused to rule out a move to Old Trafford ahead of the summer transfer window. The 29-year-old contributed 15 goals and seven assists for the Giallorossi who finished second in the Serie A.

Premier League leaders Chelsea are planning a double swoop on Italian side AS Roma with Radja Nainggolan and Antonio Rudiger at the top of their transfer shortlist.

Chelsea reportedly consider themselves favourites to sign Monaco midfielder Tiemoue Bakayoko at the end of the campaign.

Tianjin Quanjian manager Fabio Cannavaro has admitted that the club are indeed interested in Romelu Lukaku, but it would be hard to lure him to the Chinese Super League.

Chelsea head coach Antonio Conte has reportedly earmarked midfielder Arturo Vidal as his prime target for January. The Chile international is currently under a contract with Bayern Munich.

Chelsea to return for Radja Nainggolan?

Chelsea boss Antonio Conte is rumoured to be lining up a fresh bid to sign AS Roma midfielder Radja Nainggolan.