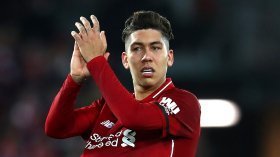 Liverpool are planning to hold contract talks with Roberto Firmino amid his impressive run of form this campaign.

Liverpool are prepared to release midfielder Alex Oxlade-Chamberlain when his contract expires next summer.

Liverpool striker Roberto Firmino has revealed that he has no plans of leaving the club this summer amid the constant speculation.

Liverpool manager Jurgen Klopp has provided a fresh update regarding the status of forward Roberto Firmino. Expected to play as a substitute this campaign, Firmino had been reportedly told that he could leave the club if a suitable offer is received.

Man Utd and Liverpool to move for Andrea Belotti

Both Liverpool and Man Utd are in the race to sign 28-year-old striker Andrea Belotti on a free transfer. The Italians triker, who played for Torino in Serie A last, had been expected to move to England last year but a deal had failed to materialise.

Liverpool attacker Sadio Mane has made the decision to move on from the club during the summer transfer window.

Arsenal and Manchester United will need to pay around £63m to sign Benfica striker Darwin Nunez this summer.

Liverpool could compete with Arsenal in the race to sign Jonathan David this summer, a report from Le10Sport claims.