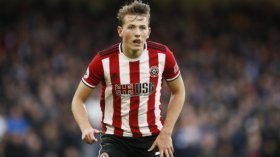 Sheffield United midfielder Sander Berge is keen on joining Arsenal when the transfer window reopens during the summer.

Arsenal and Everton are leading the race to sign Sheffield United midfielder Sander Berge during the summer transfer window.

European heavyweights Liverpool and Napoli are eyeing a move for Racing Genk player Sander Berge, with a view to making a 20 million euro transfer move in the January transfer window. The Norway international midfielder has caught the eye since making a transfer to the Jupiler League from his former club Valerenga; with Premier League side Liverpool deploying their chief scout to monitor the 6 foot 5 21-year-old in action for his club.