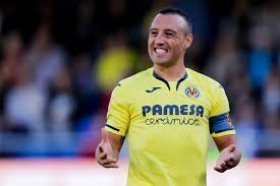 Spanish journalist Guillem Balague has revealed that Santi Cazorla is open to the prospect of returning to Arsenal in a coaching capacity in the coming years.

Spanish international defender Alberto Moreno has made a transfer back to his home country with a deal being completed to join Villarreal. The Yellow Submarines have agreed a three year contract with the left-back, who will arrive for pre-season training with his teammates next week.

Arsenal midfielder Santi Cazorla has returned to first-team training ahead of the Gunners Premier League meeting against Burnley at the Emirates Stadium.

Arsenal manager Arsene Wenger has refused to rule out the possibility of extending the contract of midfielder Santi Cazorla beyond the summer.

Arsenal are reportedly considering an approach for highly-rated Spanish midfielder Saul Niguez. The 23-year-old is currently in the ranks of Atletico Madrid for whom he has made nearly 200 appearances in all competitions.

Arsenal have identified a long-term replacement for the likely departing Jack Wilshere and Santi Cazorla. The Gunners are to make a transfer move for Schalke 04 midfield star Max Meyer in the summer transfer window.

Real Madrid are reportedly open to selling Luka Modric to Arsenal as they seek to make room for the signing of Liverpool midfielder Emre Can in the summer.

Arsenal manager Arsene Wenger is reportedly prepared to make a £53m bid in order to lure midfielder Luka Modric from Real Madrid at the end of the season.

Arsenal manager Arsene Wenger is reportedly looking into a summer agreement for Real Madrid midfielder Luka Modric. The Croatia international has been a key member of the Los Blancos squad since his arrival from Tottenham Hotspur six years ago.