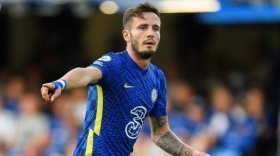 Todd Boehly ‘baffled’ by Chelsea’s decision to sign Saul Niguez and failure to land Real Madrid star Aurelien Tchouameni
... chose to sell Casemiro to Manchester United in August, such was their belief in Tchouameni. Boehly felt Chelsea should have moved for ...
21/09 18:46

Chelsea rejected the opportunity to land Aurelien Tchouameni during the 2021 summer transfer window, according to The Telegraph.

Chelsea are willing to part ways with midfielder Jorginho amid interest from Juventus, The Telegraph reports.

Chelsea will be aiming to return to winning ways when they face Leeds United on the road tonight. The Blues have picked up just two points from the last three Premier League games.

Manchester United and Chelsea are keeping tabs on Monaco midfielder Aurelien Tchouameni ahead of the summer transfer window.

Chelsea face Norwich City on the road in tonight's Premier League clash. The Blues are presently five points ahead of fourth-placed Arsenal.

Chelsea have been handed a double injury boost ahead of the Premier League meeting against Norwich City on Thursday.