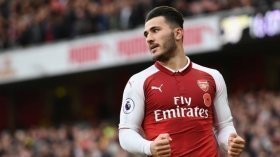 Arsenal reportedly failed to sell Mohamed Elneny to Galatasaray due to the midfielder's hefty wage demands.

Arsenal are expected to make their sixth summer signing with the arrival of Takehiro Tomiyasu from Bologna.

Arsenal midfielder on the radar of Everton

Everton are reportedly interested in landing the signature of Arsenal midfielder Ainsley Maitland-Niles.

Arsenal defender Sead Kolasinac is reluctant to terminate the final year of his contract unless his wages are compensated.

Arsenal midfielder makes the switch to Serie A

Arsenal midfielder Lucas Torreira has made the move to Fiorentina on loan with the option to buy next summer.

Arsenal winger could leave on a free transfer

Arsenal winger Willian could reportedly leave on a free transfer after being deemed surplus to requirements.

Arsenal to terminate contract of defender

Arsenal are preparing to offload multiple players before the closure of the summer transfer window, ESPN reports.

Arsenal left-back Sead Kolasinac could reportedly terminate the final year of his contract with the north London club.

Arsenal set to beat Napoli to another signing

Arsenal have reportedly reached an agreement with Benfica to sign left-back Nuno Tavares.

Arsenal ready to sell defender amid Serie A interest

Arsenal are prepared to sanction the permanent exit of Sead Kolasinac this summer, football.london reports.

Arsenal defender Konstantinos Mavropanos is reportedly on the cusp of joining Stuttgart on a permanent deal.

Arsenal defender Sead Kolasinac is expected to be sold when the transfer window reopens this summer.

Arsenal have reportedly stepped up their pursuit of Southampton defender Ryan Bertrand ahead of the summer.

Arsenal are prepared to part ways with Ainsley Maitland-Niles and Eddie Nketiah when the transfer window reopens this summer.

Arsenal to sign French left-back on a free transfer?

Arsenal are reportedly exploring the prospect of signing Jordan Amavi on a free transfer at the end of the season.