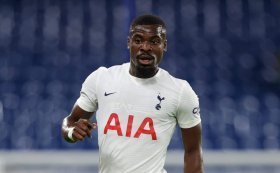 Villarreal in talks with Tottenham over Tanguy Ndombele & Giovani Lo Celso
a fresh contract to Serge Aurier - who was close friends with Ndombele at Tottenham - and he has become a free agent. While Ndombele is
09/08 16:50

Tottenham Hotspur have reportedly opened negotiations with Thomas Meunier regarding a potential free transfer at the end of the season.

Tottenham Hotspur are reportedly leading the likes of Manchester United and Chelsea in the race to sign Thomas Meunier this summer.

Chelsea and Manchester United are prepared to make fresh moves to sign Thomas Meunier, whose contract with Paris Saint-Germain expires during the summer.

Manchester United are reportedly prepared to sanction the sale of Diogo Dalot, who remains a huge favourite of Tottenham Hotspur manager Jose Mourinho.