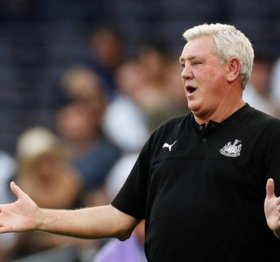 Newcastle United will land the signature of Rob Holding on loan in the near future, a report from The Times claims.

Infogol’s Jake Osgathorpe uses expected goals (xG) data to assess what we are likely to see in the upcoming Premier League season.

Newcastle United are reportedly close to landing the services of Rob Holding on a season-long loan deal from Arsenal.

Serie A side Lazio could make an attempt to sign Danny Rose from Tottenham Hotspur during this summer's transfer window.

Chelsea midfielder Ross Barkley has been identified as a potential target for Newcastle United for this summer's transfer window.

Tottenham Hotspur are prepared to part ways with defender Danny Rose on a permanent basis to Newcastle United when the transfer window reopens.

Chelsea will be aiming to register back-to-back wins in the Premier League when they face Newcastle United on the road this evening.

Reece James off to Newcastle United?

Lille striker Victor Osimhen could be offered a route to the Premier League through Newcastle United, who are keen on bolstering their strikeforce.

Chelsea manager Frank Lampard has expressed his pleasure after the Blues registered a slender 1-0 triumph over Newcastle United in the Premier League on Saturday.

Manchester United defender Axel Tuanzebe could make a loan move to Newcastle United this summer, should the Red Devils manage to land the signature of Leicester City's Harry Maguire.

Newcastle United are locked in talks with German side 1899 Hoffenheim regarding a transfer move for Brazilian 22-year-old attacker Joelinton. The Toon Army are to move quickly to sign the centre forward on a reported three year contract.

Manchester United pull out of the race for £50m-rated midfielder

Manchester United have reportedly dropped their interest in signing Sean Longstaff from Newcastle United after being quoted with a £50m asking price.