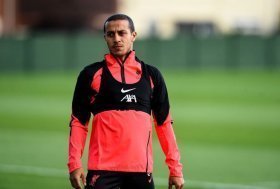 Stefan Bajcetic hails influence of Thiago Alcantara and James Milner as he signs new Liverpool contract
... ] as well helps me a lot. Chelsea and Liverpool in battle to sign Portugal star from fellow Premier League side Louis Saha makes confident ...
26/01 19:44

Benfica midfielder Enzo Fernandez has been linked with a move to Anfield next summer, as Liverpool seek to find a new long term deep lying midfielder. It is understood that the 21-year-old Argentine starlet is ready to move to England, having only just arrived in Portugal from River Plate last summer.

Liverpool manager Jurgen Klopp has provided a positive injury update on Thiago Alcantara ahead of the FA Cup fifth round tie against Norwich City.

Liverpool's hierarchy are not planning to spend on any new players during the ongoing winter transfer window.

Barcelona are reportedly keen on re-signing Thiago Alcantara from Liverpool following the appointment of Xavi Hernandez.

Liverpool midfielder Naby Keita has rejected a contract offer from the club amid his limited playing time this season.