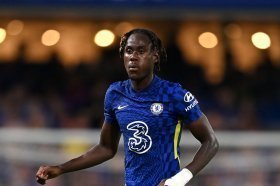 Leeds United youngster reveals 'ultimate goal' and breaks silence on hilarious off-field mischief
United is challenged by Trevoh Chalobah of Chelsea during the Premier League match between Leeds United and Chelsea at Elland Road on May 11 ...
06/12 05:45

Chelsea have confirmed that defender Trevoh Chalobah has put pen-to-paper on a new long-term contract under June 2028.

Inter Milan are reportedly plotting an approach to sign Chelsea defender Trevoh Chalobah at the end of the campaign.

Chelsea are reportedly planning to swap one of three players to sign AC Milan star Rafael Leao next year.