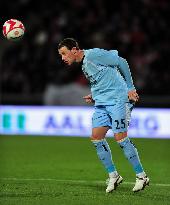 Reading boss Nigel Adkins is hopeful of further adding to his squad and win back promotion to the Premier League in the first attempt this season.

Arsenal manager Arsene Wenger has decided against making a move for a full back this month; despite a growing injury crisis at the Emirates. Arsenal expect Thomas Vermaelen and Bacary Sagna to return from injury this month.

Arsenal manager Arsene Wenger admitted yesterday that fresh injury worries for makeshift left back Thomas Vermaelen would mean that the Gunners are to investigate a defensive loan signing, and Nigerian left back Taye Taiwo is the latest name linked with a move to the Emirates.

Arsenal rule out move for full back

Arsenal manager Arsene Wenger has ruled out a move for a full back, and has not made any enquiry for Man City left back Wayne Bridge.

Arsenal manager Arsene Wenger today admitted that he may look to sign a backup full back on loan during January. Andre Santos, Jenkinson, Sagna and Gibbs - all of Wenger's four full backs - are injured.

Manchester City manager Roberto Mancini has asked Wayne Bridge to find himself a new club, and not stay at the Etihad Stadium just for the money. Bridge is currently earning 90,000 GBP a week and Mancini has told the left back that he has no future at the club.

Man City manager Roberto Mancini will be forced to trim his squad over the next year, as he attempts to ensure that the Citizens can match new financial fair play [FFP] regulations that go into force over the next 12 months.

Outspoken QPR midfielder Joey Barton lived up to his reputation of being outspoken, after he launched a scathing verbal attack on Ryan Giggs, John Terry and the England national rugby team.

Liverpool chairman John Henry has effectively ruled out signing former England international left back Wayne Bridge, after declaring the club will be signing only young players.

West Ham boss Avram Grant is keeping tabs on England left back Wayne Bridge this January. It is understood that Bridge has been told he can look at finding himself a new club.

Chelsea defender Wayne Bridge has admitted that he is certainly interested in making a move away from from Stamford Bridge to Manchester City. It is understood the Citizens are prepared to make a 9 million GBP offer for the England international.

Chelsea have announced that England international left back Wayne Bridge has signed a new long-term deal at the club. There had been rumours that the former Southampton man could join Tottenham this summer.

Claude Makelele may have cost Ashley Cole a chance of playing in the Champions League final on Wednesday night after the Frenchman gave his Chelsea team mate a crunching tackle during training.

Ashley Cole may miss out on the final of the Champions League in Moscow, after team mate Claude Makelele gave him a nasty looking crunching tackle during training prior to the game.

One of the more shocking rumours of the day came from Italy, where Chelsea left-back Wayne Bridge is being linked with a shock move to join his old boss, Claudio Ranieri, at Juventus.

Chelsea have been linked with a shock move for Real Madrid defender Sergio Ramos in the summer. Avram Grant has already indicated new players will be coming in, and the former Sevilla man is reportedly a prime target for the Blues.