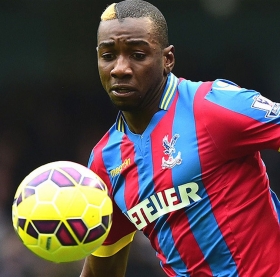 ‘Wow’: Yannick Bolasie reacts to emerging Aston Villa transfer rumour
Lucas Digne from Everton. The Daily Mail and The Athletic have reported this evening that Villa are in talks with Everton over signing
09/01 22:06

Aston Villa manager Steve Bruce has confirmed that the club are close to the loan signing of Yannick Bolasie from Premier League side Everton.

Aston Villa are reportedly among the sides vying to secure the signature of Yannick Bolasie from Everton on a season-long loan.

Liverpool face-off against Manchester City in the second leg of the Champions League quarter-final at the Etihad Stadium. The Reds secured a comfortable 3-0 win over the Citizens in the reverse fixture, but they still need to produce another strong showing on the road with Pep Guardiola's side more than capable of making a comeback.

Premier League side Everton could be prepared to rival Manchester United in the pursuit of Benfica attacker Anderson Talisca this summer.

Everton have reportedly turned down a loan attempt from AC Milan for midfielder Gerard Deulofeu. The Spaniard has had a tough spell under Ronald Koeman.

Everton are looking at the possibility of signing Demarai Gray from Leicester City. The Toffees will dip into the transfer market this winter after Yannick Bolasie sustained a serious knee injury.

Everton boss Ronald Koeman revealed that his side are on the search for midfielder reinforcements in the winter transfer window. The Toffees were dealt a blow earlier this week after Yannick Bolasie was ruled out for the season with a knee injury.

Everton are reportedly prepared to cash in on the services of midfielder Tom Cleverley in the New Year. The England international has had limited playing time under Ronald Koeman this season.

Romelu Lukaku is set to sign a new contract with Everton, as the Toffees look to ward off interest from Chelsea in the Belgian striker, according to reports.

Crystal Palace have landed the services of Christian Benteke from Liverpool for an undisclosed fee. The 25-year-old joins the Eagles following a frustrating season at Anfield.

Crystal Palace in for Moussa Sissoko?

Crystal Palace have identified Moussa Sissoko as the ideal player to bolster their ranks this summer. The Eagles are currently short in the attack front after they let Yannick Bolasie join Everton in a £25m deal.

Yannick Bolasie has bid farewell to his Crystal Palace teammates ahead of his proposed switch to Everton. A £30m fee has been finalized for the transfer.