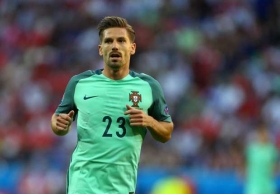 The 2019 winter transfer window will shut in 2 days as many clubs including both Leicester City and Tottenham are urgent to get deals finalised.

Portugal international Adrien Silva feels 'disillusioned' after he failed to seal a summer move to Leicester City prior to the proposed transfer deadline.

Leicester City are still in the dark over whether they have secured a deal for Sporting midfielder Adrien Silva.

Tottenham are looking for an alternative to Everton's Ross Barkley and have identified Sporting Lisbon's captain Adrien Silva as the perfect player.

West Bromwich Albion are the latest to be linked with a move for Sporting captain Adrien Silva.

Leicester City boss Claudio Ranieri has hinted that the club could lodge a bid for Adrien Silva when the transfer window reopens in January. The English champions were hot on the pursuit for the player over the summer but unfortunately a deal could not be materialized.

Tottenham have submitted a formal offer for Sporting Lisbon midfielder Adrien Silva. The 27-year-old has caught the eye of several clubs following his impressive showing at the European championships.

Tottenham, Liverpool and Arsenal are all interested in signing another Sporting Lisbon young starlet, Adrien Silva. The Portuguese midfielder has been long scouted by the Premiership sides, and a move could be likely within the next six months to the Premiership.