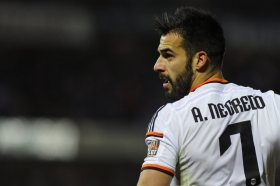 Cadiz: The Spanish Giant Killers You Need to Take Notice of
all over Europe, Alvaro Negredo. The 35-year-old arrived on a free transfer from Dubai-based Al Nasr with a record of 111 goals in 264 La
06/12 17:03

Liverpool outcast Divock Origi has been closely linked with a January exit. The Echo reported that the Reds are prepared to sell the Belgium international but have set a £20m asking price amid interest from Everton and Wolves.

Turkish heavyweights Besiktas are planning a lucrative deal to lure Chelsea striker Olivier Giroud to Istanbul ahead of the 2019/20 campaign.

Spain international Alvaro Negredo has secured his move to Turkish giants Besiktas from Valencia on a three-year contract.

Swansea City and Leeds United will battle for the signing of former Manchester City striker Alvaro Negredo. Leeds are hoping that despite not being able to offer Premier League football that they will be able to make the Spanish striker their tenth signing of the summer.

Alvaro Negredo on his way to Galatasaray?

Former Manchester City striker could be heading for a fresh challenge in Turkey with Galatasaray once his season-long loan with Middlesbrough concludes this summer.

Brazilian sensation Gabriel Jesus scored late on at the Riverside to rescue Manchester City a point, and deny Middlesbrough a victory that they desperately needed, in their attempt to remain in the Premier League.

Middlesbrough to sign Iago Aspas at end of season?

Aston Villa will lodge a loan attempt for Jordan Rhodes when the transfer window reopens in the New Year. The Scotland international has struggled to earn a regular run at Middlesbrough this season.

Alvaro Negredo off to Middlesbrough?

Former Manchester City striker Alvaro Negredo is reportedly in talks over a temporary move to Middlesbrough. The Spaniard has struggled to prove his credentials since his switch to Valencia in 2014.

Spain international Alvaro Negredo could be on his way back to the Premier League, according to reports.

Manchester City will try to offer Arsenal the option of signing one of their out-of-favour striker to seal a deal for Jack Wilshere this summer.

Hoffenheim star Roberto Firmino is regarded as a top target for Manchester City during the summer transfer window.

We are at the halfway point of the Premier League season and it's fair to say that Liverpool Football Club are nothing but a shadow of the team they were last season. While many deem their well below par defence as the issue, very few take notice of the kopites shortcomings in the final third.

Spanish striker Alvaro Negredo will make a permanent move to Valencia from Man City. The striker is currently on a season long loan deal at the La Liga side.

Manchester City are prepared to make a January swoop for Southampton's star striker Jay Rodriguez, according to a report.

Valencia have revealed that they have reached an agreement to sign Alvaro Negredo on loan, with the option to a permanent transfer next summer.

Arsenal have apparently made an enquiry over the availability of Manchester City striker Alvaro Negredo, according to a report.

Valencia closing in on Negredo

La Liga side Valencia are reportedly closing in on a loan deal to obtain the services of Manchester City striker Alvaro Negredo.