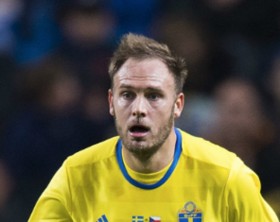 33-year-old defender Andreas Granqvist has been linked with a move to Man Utd and the Swedish international captain has told the media in his home country that he is delighted to have been mentioned as part of a potential January deal to move to the Premier League. Granqvist was an integral part of Sweden's World Cup during the World Cup in Russia last summer.

Brighton and Hove Albion are looking to strengthen their squad in the January transfer window with a move for Sweden international Andreas Granqvist. The centre-back was an important member of the squad that successfully knocked out Italy to qualify for the World Cup in Russia next year.

Liverpool are considering a move for Swedish defender Andreas Granqvist, currently playing for Genoa. The Swede only joined Genoa in June of this year, but Liverpool are ready to offer the Italian side a quick profit.

Sweden coach Lars Lagerback has now named his 23 man selections for the Euro 2008 squad in Austria and Switzerland. There are a total of five players from the Premiership in the squad.

Steve Bruce has complete confidence in his Wigan squad as they battle for Premiership survival. Bruce is not worried about suggestions that he may be in the firing line if Wigan are relegated.

Bolton picked up a massive 3 points as they defeated relegation rivals Wigan 4-1 at the Reebok Stadium. The defeat left Steve Bruce fuming and Gary Megson delighted as Bolton look to move further away from the relegation zone.