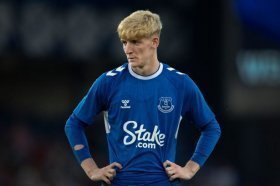 Everton coach Frank Lampard has effectively ended all talk of Anthony Gordon departing Goodison Park for a move to Chelsea, suggesting that the transfer deadline is now too close and the club have decided to keep Gordon. Chelsea have had a bid of £45 million rejected for the winger.

Chelsea are set to sign RB Leipzig defender Josko Gvardiol in advance for next summer, according to Fabrizio Romano.

Chelsea are prepared to pay £60 million to prise away Anthony Gordon from Everton this summer, according to The Telegraph.

Man Utd star hits out at disgraceful performance vs Everton

Manchester United goalkeeper David de Gea has hit out at the club's disgraceful performance against Everton in the Premier League.