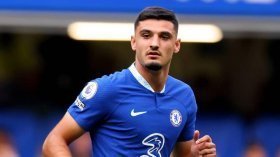 AC Milan 'are considering a move for Chelsea forward Armando Broja' as club chiefs 'see him as a 'perfect fit' for their system'... with the Rossoneri 'unable to rely on Olivier Giroud and not yet convinced by Divock Origi'
... looking to bring in another forward. Former Liverpool star Divock Origi joined the club on a free transfer over the summer but is yet to ...
28/09 10:34

Chelsea could focus on this attacking position in January

Chelsea could look to bolster the wide attacking department when the transfer window reopens at the turn of the year.

AC Milan are looking into signing Chelsea striker Armando Broja, according to Calciomercato.

Chelsea manager Graham Potter is prepared to hand a regular starting role to Armando Broja after the international break.

German forward Timo Werner has his sights on leaving Chelsea this summer amid the lack of assurances of game time.

West Ham will sign Sassuolo striker Gianluca Scamacca for a fee of around 38 million euros this coming week, with the Italian international set to sign a long-term contract with the Hammers. West Ham have been looking for a new striker to add to their squad as Michail Antonio appeared to be struggling towards to end of last campaign.

Chelsea are reportedly fighting to keep Armando Broja amid interest from West Ham United this summer.