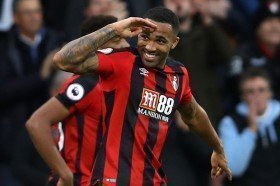 Newcastle United have been linked with a surprise move for Pierre-Emerick Aubameyang during the January transfer window.

Newcastle United have no plans of signing former Liverpool striker Daniel Sturridge on a free transfer.

Newcastle United have reportedly been handed the opportunity to sign Daniel Sturridge on a free transfer.

Aston Villa have secured a major coup in the signing of Brentford attacker Ollie Watkins in a deal worth a reported £33 million. The Villains have moved swiftly to snap up Watkins, beating the likes of West Ham to the coveted forward's signature.

Tottenham Hotspur manager Jose Mourinho is reportedly in contact with Bournemouth striker Callum Wilson in order to lure him to the north London side.

Tottenham Hotspur have confirmed their first signing of the summer transfer window with Pierre-Emile Hojbjerg joining them from Southampton.

Chelsea could reportedly retain their interest in re-signing Nathan Ake from Bournemouth at the end of the current season.

Chelsea have reportedly ended their interest in signing Callum Wilson from Bournemouth, given his performances have dropped over the course of the current season.

Manchester United boss Ole Gunnar Solskjaer is reportedly keen on recruiting the services of Callum Wilson from Bournemouth this winter.

Amidst the interest of West Ham in acquiring the services of Callum Wilson from Bournemouth, the Cherries have given the England international striker a fresh contract at the club. Wilson had been linked with a move to the Hammers as part of a £45 million transfer deal.

Bournemouth have reportedly told Chelsea that they would need to pay at least £75m in order to prise away Callum Wilson from the South Coast this month.

Chelsea are reportedly willing to make a tempting £50m offer for Bournemouth's Callum Wilson, should they fail in their pursuit of number one target Gonzalo Higuain.

Chelsea are reportedly planning an ambitious approach to sign Edinson Cavani from Paris Saint-Germain in order to solve their crisis in the striking department this season.