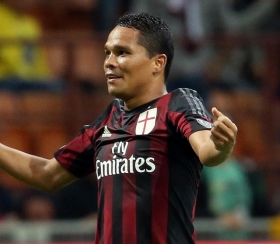 What happened to Carlos Bacca? The 2016 transfer saga striker who rejected West Ham
Carlos Bacca to West Ham was the transfer saga of 2016 as Slaven Bilic looked to bolster his attack heading into the ...
11/08 12:30

Premier League holders Chelsea have placed a £55m price tag on Diego Costa's head as they look to offload him to a European rival this summer, Sky Sport Italia claims.

AC Milan forward M'Baye Niang is apparently holding out for an Arsenal move despite the impending interest from Everton, Calciomercato claims.

Arsenal had reportedly sent representatives to keep a close watch on Carlos Bacca during AC Milan's Serie A clash against Bologna.

West Ham back in for Carlos Bacca?

West Ham United are set to retain their interest in AC Milan's Carlos Bacca just a year after the player snubbed a move to east London.

Arsenal to return for Serie A striker

Arsenal will reportedly revive their pursuit of AC Milan striker Carlos Bacca after a failed attempt to pursue his signature in January.

West Ham to move in for Wilfried Bony?

West Ham United will reportedly battle it out with the likes of Everton and West Bromwich Albion in the pursuit of Manchester City striker Wilfried Bony.

Liverpool's Daniel Sturridge could be off to this club

England international Daniel Sturridge will reportedly be offered an escape route this summer with AC Milan prepared to prise him away from Liverpool.

AC Milan star Carlos Bacca has revealed that he has knocked back a lucrative move to the Chinese Super League. The Colombia international was holding out for a move to one of Arsenal or Atletico Madrid last summer before he stayed put at San Siro.

Colombian striker Carlos Bacca will not be pushing for a winter exit from AC Milan, according to his agent. The 30-year-old was the subject of interest from West Ham United, Paris Saint-Germain and Arsenal in the summer.

Arsenal have reportedly revived their interest in AC Milan striker Carlos Bacca ahead of the winter transfer window. The Colombian is said to be desperate to leave the Rossoneri having previously missed out on a summer exit.

AC Milan will step up their interest in Daniel Sturridge, should Carlos Bacca depart the club in the January transfer window. The Liverpool striker has struggled to impress under Jurgen Klopp this season.

Carlos Bacca has decided to call quits on his AC Milan career when the transfer window reopens in January. The Colombian striker was on the verge of joining Paris Saint-Germain in the summer but a deal failed to materialize.

West Ham United striker Simone Zaza could be set to return to Serie A to join AC Milan in January, as the Hammers are considering cutting short the Italian’s loan from Juventus, according to reports in Italy.

Reported Arsenal target and AC Milan striker Carlos Bacca has revealed that he failed to earn a move to Paris Saint-Germain in the recently concluded transfer window.

AC Milan star Carlos Bacca had snubbed West Ham United in the hope of earning a move to one of Arsenal or Atletico Madrid, manager Slaven Bilic has claimed.