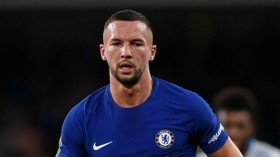 Kasper Schmeichel BENCHED by Nice amid claims of being 'overweight', Jamie Vardy's now a sub, Christian Fuchs is an unlikely MLS cult hero, Danny Drinkwater's on the scrapheap and poker keeps Danny Simpson busy... where Leicester's title winners are TODAY
... his release from Chelsea this summer, Drinkwater's career remains in freefall. Outcast Danny Drinkwater was released by Chelsea in the ...
02/10 21:14

Chelsea defender Marcos Alonso has been fancied to join Atletico Madrid on loan next month.

Chelsea are reportedly struggling to find buyers for five out-of-favour players ahead of next month's transfer window.

Chelsea are still interested in landing the signature of midfielder Declan Rice from West Ham United, a report from The Star claims.

England international Danny Drinkwater has confirmed that he will leave Chelsea during the ongoing transfer window.

Chelsea close to negotiating midfielder exit to Serie A club

Chelsea are close to negotiating the departure of Tiemoue Bakayoko on a temporary basis to AC Milan, a report from Calciomercato claims.

Chelsea midfielder heading to AS Roma?

Chelsea midfielder Jorginho could be heading through the exit door this summer amid the interest from AS Roma.

Inter Milan are reportedly planning to step up their interest in signing N'Golo Kante from Chelsea during the current transfer window.

Chelsea to offload 10 players this summer?

Chelsea are reportedly prepared to part ways with 10 first-team stars as they look to recoup funds for additional purchases this summer.