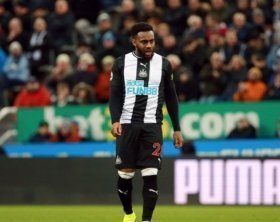 Watford transfer stance emerges regarding 28-year-old
in games. Danny Rose has not been involved since early December at Watford, therefore it is no surprise to see that Kamara is going to be
20/07 14:11

Despite the fact that the stadiums are empty, the matchday revenues are down and the uncertainty of the post-lockdown world continues to dominate the 2020-21 Premier League campaign, the summer transfer window is once again well on its way to smashing all manner of records with some of the most mouth-watering fees ever seen in the game.

England international left-back Danny Rose will extend his stay with Newcastle United in to next season after reportedly agreeing to a deal with the Magpies. The player, who is desperate to leave parent club Tottenham, is set to depart White Hart Lane for a fee of around £3.5 million.

Serie A side Lazio could make an attempt to sign Danny Rose from Tottenham Hotspur during this summer's transfer window.

Newcastle United have reportedly opened negotiations with Tottenham Hotspur over extending the loan contract of Danny Rose until the end of the season.

Chelsea have reportedly opened negotiations with Leicester City over a possible summer deal for Ben Chilwell.