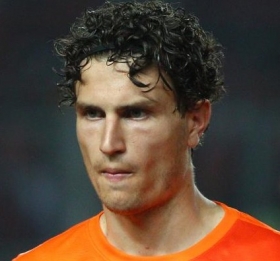 Liverpool are reportedly considering a move for Daryl Janmaat, who is a free-agent following his release from Watford.

It's a busy transfer deadline day for Watford as they have completed the transfer of Udinese defender Molla Wague. The player has agreed to move to the Hornets on a season long loan deal with a view to a permanent move next summer.

Chelsea confirmed their title of Premier League Champions on Friday night, and they were back in action again on Monday. Already in high spirits, the Stamford Bridge crowd were treated to a seven goal spectacle against Watford.

Watford have reached an agreement with Newcastle United to sign Dutch full-back Daryl Janmaat this summer. The 27-year-old had been tipped to leave the Magpies after they were relegated from the top flight.

Netherlands international defender Daryl Janmaat will complete a transfer to Watford this week in a deal worth a reported 6.5 million GBP. The versatile defender will make a return to the Premier League and sign a four year contract.

Watford are lining up a potential bid for Newcastle United defender Daryl Janmaat. The Netherlands international is destined to leave the Magpies this summer after they were relegated to the Championship.

Newcastle United have completed the signing of Jesus Gamez from Atlético Madrid, with the experienced defender signing a two year deal at St James' Park.

Spanish side Valencia have lodged a formal bid for in-demand Newcastle United defender Daryl Janmaat. The Netherlands international has been tipped to leave the Magpies following their relegation to the second tier of English football.

Juventus close in on Janmaat

Serie A holders Juventus are in advanced negotiations with Newcastle United to sign Netherlands full-back Daryl Janmaat. The 26-year-old is likely to leave the Magpies following their relegation to the Championship.

Liverpool will consider an offer for Newcastle United defender Daryl Janmaat at the end of the season, according to The Star.

Arsenal are apparently close to the signing of Mathieu Debuchy from Newcastle United this summer, according to ESPN.

Dutch defender Daryl Janmaat is set to join Newcastle and sign a six year contract at St James' Park. The versatile Dutch defender has been chased by the Toon Army for most of the summer.

Newcastle manager Alan Pardew will be delighted to hear that he appears to have won the race to sign Monaco forward Emmauel Riviere; beating West Brom and Tottenham to the striker's signature.

Newcastle are hoping to bring Micah Richards to St James' Park as a replacement for Mathieu Debuchy. Debuchy is on the verge of a move to Arsenal.

Newcastle are the latest side to have expressed some interest in Dutch international full back Daryl Janmaat. The 24-year-old right sided defender, currently on international duty with the Netherlands, has been told he can leave Feyenoord for a reported 8.5 million Euros.

Dutch right back Daryl Janmaat has rejected a contract offer from Feyenoord. The 24-year-old defender has supposedly decided to wait to find out of reports of a potential free transfer move to Arsenal in the summer are true.

Arsenal could make a transfer move for right back Seamus Coleman next summer if Bacary Sagna refuses to sign a new deal. The Gunners' current first choice right back has been locked in talks with his club for over a year.