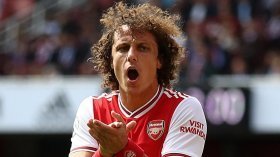 Premier League duo West Ham United and Everton were in the mix to sign David Luiz following his release from Arsenal earlier this summer.

Arsenal and Brighton and Hove Albion have reached an agreement for the transfer of defender Ben White this summer. The Gunners have been chasing the defender since prior to the Euro 2020 tournament.

Arsenal defender William Saliba is set to join Marseille on loan for the forthcoming campaign.

Newcastle United and Lille are among the clubs interested in signing William Saliba on a season-long loan.

Arsenal yet to finalise deal for Ben White

Arsenal have yet to reach an agreement with Brighton & Hove Albion for defender Ben White.

Arsenal to swoop for Fulham defender?

Arsenal are reportedly lining up a move for Fulham defender Tosin Adarabioyo, who could be available for around £10m.

Arsenal have no plans of offloading William Saliba on a permanent basis this summer, football.london claims.