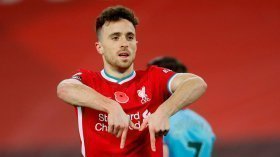 Liverpool have suffered a major blow with Luis Diaz undergoing surgery for a fresh knee injury.

Liverpool manager Jurgen Klopp has said that Mohamed Salah will be assessed ahead of the Premier League meeting against Arsenal.

Liverpool could compete with Arsenal in the race to sign Jonathan David this summer, a report from Le10Sport claims.

Liverpool boss unsure over duo ahead of Carabao Cup final

Liverpool manager Jurgen Klopp is unsure over the fitness of Diogo Jota and Roberto Firmino ahead of the Carabao Cup final against Chelsea this weekend.