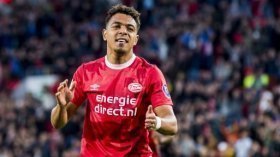 Discarded Arsenal star among Dortmund's Jadon Sancho replacements in latest Gunners blow
identified former Arsenal youngster Donyell Malen as a possible replacement for Jadon Sancho. Malen was a schoolboy at Arsenal before he was
17/01 13:50

Barcelona could make an attempt to sign PSV Eindhoven forward Donyell Malen in January, should they fail to land the signature of Memphis Depay.

Arsenal are considering a move to re-sign Dutch youngster Donyell Malen from PSV Eindhoven. The in-form attacker has been earmarked as a possible long-term replacement for Gunners strike duo Lacazette and Aubameyang.

Arsenal are reportedly planning a January approach to sign PSV Eindhoven forward Donyell Malen, who has been in scintillating scoring form this season.

Arsenal have beaten their rivals to the signing of Ajax striker Donyell Malen on a scholarship deal.