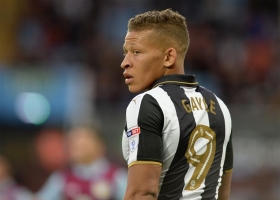 Newcastle United: Liam Kennedy drops verdict on Dwight Gayle
.” Newcastle signed Gayle back in the 2016 summer transfer window from fellow Premier League side Crystal Palace for a fee of £10.8 million
11/06 15:20

Lille striker Victor Osimhen could be offered a route to the Premier League through Newcastle United, who are keen on bolstering their strikeforce.

Newcastle United striker Dwight Gayle has reportedly agreed to join West Bromwich Albion on loan as part of a deal which would witness Salomon Rondon head to St James Park.

Newcastle United are reportedly close to acquiring the signature of Salomon Rondon from West Bromwich Albion after the Venezuelan was left out of the Baggies squad for the Championship opener.

Stoke City have reportedly made an offer worth £10m to pursue the signature of Newcastle United striker Dwight Gayle.

Fulham will reportedly seek to pursue a permanent deal for Newcastle United's Aleksandar Mitrovic, should they clinch promotion to the Premier League. The west London outfit face off against Aston Villa in the Championship play-off final on Saturday.

Having missed out on Arsenal's Lucas Perez, Newcastle manager Rafael Benitez has identified West Ham's Andy Carroll as the man who can strike a formidable partnership with Dwight Gayle upfront.

Newcastle manager Rafa Benitez sees the Arsenal flop as a solid addition to his squad and will lodge a bid for the Spaniard in the coming days.

Newcastle United are reportedly lining up a bid for Real Sociedad's Willian Jose ahead of a potential summer spending spree.

Newcastle United striker Aleksandar Mitrovic could be the subject of winter bids from Crystal Palace and Swansea City. The Serbian international has restricted of regular playing time due to the form of Dwight Gayle.

Aston Villa's Ciaran Clark is the latest to be linked with a move to Newcastle United. The Magpies have been busy in the transfer market recruiting no more than five players this summer.

Arsenal graduate Isaac Hayden has joined Championship side Newcastle United on a five-year contract. The 21-year-old spent the previous season on loan at Hull City where he made 24 appearances in all competitions.

Crystal Palace have shifted their focus to Liverpool striker Christian Benteke after they failed in their attempts to land fellow Belgian Michy Batshuayi.

Newcastle United have confirmed the signing of Scotland midfielder Matt Ritchie from Bournemouth. The transfer fee has yet to be disclosed.

Crystal Palace are reportedly in talks over a new contract for striker Dwight Gayle.

Crystal Palace are hopeful that Norwich City will come up with an offer for out-of-favour forward Dwight Gayle, should Lewis Grabban head back to Bournemouth.

Crystal Palace are ready to revive their pursuit for Queens Park Rangers striker Charlie Austin, according to reports.