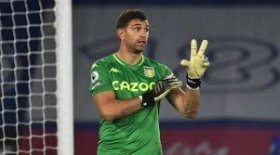 Emiliano Martinez penalty antics could be banned with IFAB to clamp down on gamesmanship following World Cup controversy
... a crude gesture with the Glove. Speaking about the incident, the ex- Arsenal star said: “I did it because the French booed me. Pride does ...
28/01 18:55

Juventus to sign Manchester United star on a free transfer?

Chelsea to return for €80m-rated star in January

Chelsea could revive their interest in signing Jules Kounde when the transfer window reopens in January.

Manchester United are exploring the prospect of re-signing former goalkeeper Tom Heaton on a free transfer.

Chelsea are scheduled to face Tottenham Hotspur on the road in tonight's Premier League clash.

Arsenal have made their first signing of the January transfer window with the arrival of goalkeeper Mat Ryan on a temporary deal.

Arsenal are still optimistic of signing Barcelona goalkeeper Neto despite Ronald Koeman stating that the shot-stopper is not for sale this month.