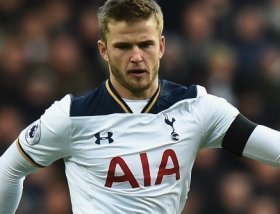 Tottenham Hotspur are reportedly keen to part ways with Davinson Sanchez when the transfer window reopens this summer.