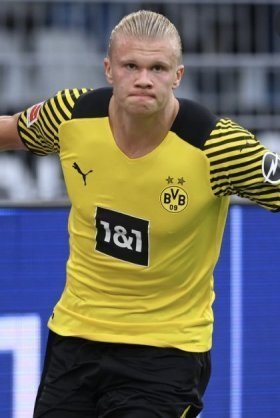 Erling Haaland promise could help Man City boss Pep Guardiola complete dream signing
... earlier this season. On that night, the teenager scored at the Etihad Stadium and performed superbly albeit in a losing cause, while he has ...
07/12 08:00

Liverpool and Manchester United face a difficult task on their hands to sign Jude Bellingham from Borussia Dortmund next summer.

Chelsea have been handed a big boost in signing Christoph Freund as their new sporting director.

Chelsea are reportedly on the cusp of signing Raheem Sterling from Manchester City this summer.

Chelsea have opened negotiations to sign Nathan Ake and Raheem Sterling from Man City. Pep Guardiola has informed both players that they are free to leave the Etihad Stadium.

There is a growing feeling that Raheem Sterling will consider leaving Manchester City this summer. Sterling was rotated a lot by Pep Guardiola last season, and he won't settle for an uncertain game time. His concerns over playing time have increased since the competition over the attacking positions will increase due to the arrivals of Erling Haaland and Julian Alvarez. The England international has just under 12 months remaining on his current contract, and talks over a new deal have stalled.

The Daily Mail has reported that Arsenal are "very close" to securing a transfer deal for Man City and Brazil international striker Gabriel Jesus in a transfer package worth between 50-60 million euros. Alexandre Lacazette yesterday opted to transfer to his former club Lyon, leaving the Gunners short of attacking options.