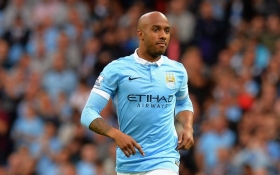 Everton have reportedly agreed on an initial fee of £29m to secure the signature of Moise Kean from Juventus this summer.

Man City and Everton have reached an agreement over the transfer of England international player Fabian Delph. The versatile defender, who has also attracted the interest of his former club Aston Villa, will pen a three year contract at Goodison Park and will be a first-team regular for the foreseeable future.

Man City have agreed a deal that sees the return of full-back Angelino to the club from PSV Eindhoven. The Cityzens have taken up their first option to re-sign the player from the Dutch club following a previous stint at the Etihad Stadium from 2014.

Manchester City have been named as a likely destination for Juventus left-back Alex Sandro in January, with Turin newspaper Tuttosport claiming that the 27-year-old could end his stay in Italy this winter.

Manchester United manager Jose Mourinho has confirmed that he has a near full strength side to choose from for this weekend's derby against Manchester City.

Manchester City defender Danilo has emerged as a potential target for Porto amid his reduced playing under Pep Guardiola this term.

Manchester City defender Danilo is reportedly eyeing a fresh challenge away from the Etihad Stadium during the January transfer window.

Manchester City will look to maintain their slender lead in the Premier League when they take on Chelsea at Stamford Bridge on Saturday. The Citizens are currently on 16 points for the season, and they are just ahead of rivals Manchester United on goal difference.

Could experience be crucial in helping Villa get promotion?

If last season wasn’t depressing enough for supporters of Aston Villa, then starting this season in The Championship could be even worse, couldn’t it? But Manager Steve Bruce wants promotion straight back up but he obviously believes he needs experience, and after signing John Terry from Chelsea & Ahmed Elmohamady from Hull, he now looks set to sign Irish International Glenn Whelan from Stoke. But what does Glenn Whelan give you?

Manchester City's England international Fabian Delph has emerged as a target for Stoke City. Delph has been unable to secure regular first team football in Manchester and will be desperate to prove what he can do as we enter a World Cup year.

Newcastle United boss Rafa Benitez is reportedly growing frustrated at the lack of transfer activity on the club's return to the Premier League.

Manchester City are ready to sell England midfielder Fabian Delph this summer in an attempt to make space for new signings and will look to raise a fee of £12 million for him.

Newcastle manager Rafael Benitez has identified Manchester City midfielder Fabian Delph as the ideal player to raise the standard of his squad in the Magpies return to the Premier League.

With less than ten games to go in the 2016/17 Premier League season, it's still all to play for. Tottenham continue to chase Chelsea for the trophy, several teams are battling it out for a Champions League spot and at the bottom, a real relegation scrap is taking place.

Manchester City Pep Guardiola has plans of going on a home-grown spending spree during the summer transfer window.

West Bromwich Albion have been told to forget about the signing of Fabian Delph this month. Manchester City will keep hold of the midfielder for the ongoing campaign.