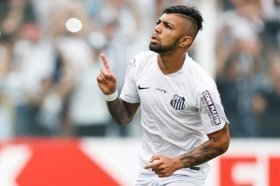 Report: Flamengo striker Gabriel Barbosa wasn’t interested in joining a team battling relegation, dealing a blow on West Ham United’s chances in January
West Ham United were keen to bolster their attack during the January transfer window and were regularly linked with...
04/03 18:13

Tottenham Hotspur are reportedly looking to swoop for the services of Gabriel Barbosa from Inter Milan as they seek to find a replacement for the injured Harry Kane.

Crystal Palace only club credited as interested in player, as €20m transfer desired by sellers

Premier League side Crystal Palace are once again linked to the Brazilian striker Gabriel Barbosa. This time, by the Italian media.

Inter Milan forward Gabriel Barbosa has played down a potential switch away from San Siro despite his limited action in the starting lineup this season.

Brazilian striker Gabriel Barbosa is eyeing a winter exit from Inter Milan having become frustrated with the lack of first-team action. The teenager has featured for just 16 minutes under new boss Frank de Boer.

Brazilian youngster Gabriel Barbosa has admitted that he chose Inter Milan ahead of Serie A champions Juventus. The striker linked up with the Nerazzurri last week following an extended rest for his involvement at the Olympics.

Reported Manchester United and Chelsea target Gabriel Barbosa has secured a move to Inter Milan from Santos. The 20-year-old has penned a five-year contract with the San Siro outfit.

Inter Milan are closing in on the signing of Brazilian sensation a Gabriel “Gabigol” Barbosa, according to reports in Italy.

Manchester United are lining up a £30 million bid for Brazilian sensation Gabriel “Gabigol” Barbosa, according to reports.

Man Utd to announce their fifth signing of the transfer window

Manchester United are apparently in pole position to secure the services of Santos forward Gabriel Barbosa. The youngster is regarded as one of the finest talents to have come out of Brazil.

Chelsea are nearing an agreement for Santos' Gabriel Barbosa after they outbid Juventus to the player's signature. The youngster is regarded as one of the best upcoming talents from Brazil.

Chelsea are confident of signing Brazilian striker Gabriel Barbosa from Santos, despite interest from Juventus, according to reports.

Arsenal are reported to have made a formal approach for highly-rated Santos youngster Gabriel Barbosa. The 19-year-old currently has a £42m release clause in his contract.