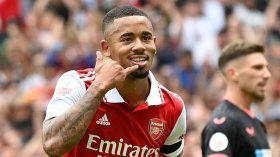 Belgium international striker Leandro Trossard could be set for a surprise move to Premier League leaders Arsenal in the January transfer window, as Trossard's club Brighton and Hove Albion appear resigned to losing their star forward this month. The Gunners missed out on a move to sign Mykhaylo Mudryk, who joined Chelsea, and will now switch their attentions to Leandro Trossard.

Arsenal's failed efforts to sign Mykhaylo Mudryk means that the club have switched their attentions to signing Eden Hazard from Real Madrid on a loan transfer. It is understood that the Gunners have been unable to agree a fee with Shakhtar Donetsk for Mudryk, attempted a last ditch offer to sign Joao Felix on loan from Atletico Madrid, but the player has opted to join Chelsea, and now the Emirates Stadium out fit will swoop for Eden Hazard on a six month deal.

Arsenal are currently sitting pretty in first in the Premier League, but pundits agree that new faces are required to win the club's first title in 18 years. Mudryk appears to be the primary target at the Emirates.

Manchester United and Arsenal target Jonathan David has opened the door for a Premier League move.

Arsenal and Man Utd in final talks for Joao Felix?