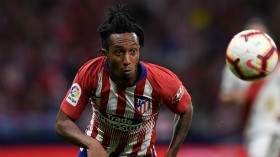 Monaco have agreed a transfer for Gelson Martins from Atletico Madrid, having persuaded the Portuguese forward to extend his loan stay at the club and sign a permanent deal. The player will arrive for a fee of around 27 million euros at the Stade Louis II.

Arsenal back in the race to sign Atletico Madrid star?

Arsenal have reportedly revived their long-term interest in signing Gelson Martins from Atletico Madrid this summer.

Arsenal boss Unai Emery is reportedly said to have reservations over a permanent deal for Denis Suarez from Barcelona at the end of the season.

Alvaro Morata on his way to Atletico Madrid?

Atletico Madrid could reportedly finalise the signing of Alvaro Morata from Chelsea once the Blues reach an agreement to pursue Juventus' Gonzalo Higuain.

Everton have reportedly joined the likes of Arsenal in the pursuit of Sporting winger Gelson Martins. The Portugal international has been widely tipped to leave the club on a free this summer following a training ground incident last month.

Arsenal have reportedly failed with an opening bid to sign Gelson Martins from Sporting much to the frustration of the Portuguese footballer.

Premier League giants Liverpool have made their interest heard for Sporting winger Gelson Martins. The Reds are searching for a replacement for Philippe Coutinho, who made his way to Barcelona earlier this month.

Liverpool reportedly hold no interest in front duo Riyad Mahrez and Thomas Lemar despite the departure of Philippe Coutinho to Barcelona.

Arsenal are reportedly lining up a double swoop for William Carvalho and Gelson Martins from Sporting this summer.

Manchester United are reportedly set to offer stiff competition to Liverpool in the pursuit of Sporting attacker Gelson Martins.

Liverpool are reportedly eyeing a move for Sporting winger Gelson Martins during the summer transfer window. The Portugal international was a transfer target for Manchester United last year.

Chelsea to move for Portuguese starlet?

Chelsea have made an enquiry for Sporting Lisbon winger Gelson Martins. Reports from Portugal suggest that the Premier League leaders are in advanced talks with Sporting regarding a move for the 5 foot 8 player.