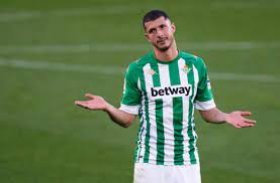 Who is Guido Rodriguez? The Argentine Casemiro linked with January Arsenal transfer
Arsenal will be ramping up their preparations for the January transfer window, which is now just two weeks away. The north London outfit
18/12 15:02

Arsenal are reportedly monitoring Real Betis midfielder Guido Rodriguez with a view to a potential transfer.

Arsenal have been handed a boost in signing Yves Bissouma with the midfielder open to leaving Brighton & Hove Albion this summer.

Arsenal are reportedly interested in landing the signature of former academy graduate Glen Kamara from Rangers.

Arsenal to compete with Manchester City for Italian midfielder?

Arsenal could compete with Manchester City in the race to sign Manuel Locatelli from Sassuolo.

In an interview with Estadio Deportivo, Argentine midfielder Guido Rodriguez said that he is aware of the transfer interest from Arsenal.